POUTINE PLAYER OF THE WEEK 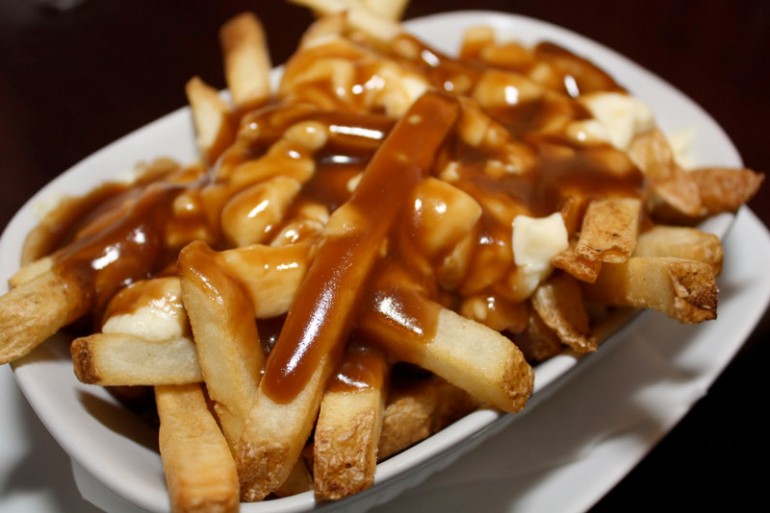 SEASON 9- POUTINES ARE PREPAID AT THE SNACK BAR AND YOUR NAME IS ON A LIST
WEEK 1: Josh McWhirter - The Pack
Josh started his season earning two hard fought W's against the Anchorman and the Bruisers. He left both teams he played frustrated by making numerous saves in both games.
WEEK 2: Mark Sinclair - Anchorman
Mark was in on all but one marker in the Anchorman s 7-5 win over the Outlaws collecting 3g and 3a for a 6 point night.
WEEK 3: Shane Jackson had a big game against the Bruisers this week scoring 4x to help his team defeat the Bruisers this week.
SEASON 8 - Poutines are pre-paid at snack bar and your name is on a list.
Week 1: Louis Charbonneau - Devil Dogs Goalie
Louis marked down a shut out versus The Outlaws in his first official BFHL game.
Week 2: Drew Hill - Anchormen Goalie
Back to back wins this week, Drews last line of defence for his undefeated team earns him some gravy.
Week 3: Doug Vincer - The Pack
In his first week back, Doug scored 3x goals including 2x game winners.
Week 4: Andrew Boyes - The Pack
Boyes scored the game winner versus Flyers Wednesday, and has helped lead The Pack to a solid start to the season.
Week 5: Matt Leveille - Outlaws
Matt scored the game winner in what I think was the longest shoot out to date, earning his team their second win.
Week 6: Steve Presley - The Pack
Steve put up a shutout Wednesday versus the Bruisers, and has been playing solid goal all season helping his team dominate the top spot.
Week 7: Brent Campbell - Anchormen

Brent led the charge to a comeback win, with a hat trick in the 3rd period versus the 1st place Pack, stealing the game.
Week 8: Alex Archer & Rick Armstrong - Flyers

Archer & Armstrong connected for 4x back to back goals Wednesday, something Im not sure we have ever seen, and worth a poutine each.
Week 9: Steve Presley - The Pack
Watching this game from the timekeepers box, I thought Steve just played a solid game all around, slowing down the Outlaws several times before they could get momentum going
Week 10: Tyson Whitehead - Bruisers
Tyson led the way last Sunday with a hat trick and one of the nicest goals Ive seen up there. The big man has hands!
Andrew Boyes - The Pack
Boyes now leads the scoring race with his Hat Trick Sunday versus the Devil Dogs
SEASON 7 - Poutines are pre-paid at snack bar and your name is on a list.

Week 1: Ryan Brown - Bruisers
Ryan started the season with back to back hat tricks, cant argue with that.
Week 2: Chase Wilson - Flyers

Chase continues to play solid goal for the Flyers, living up to his 1st overall pick rep, playing a big part in putting his team in the top spot.

Marshall put up what I think is his first BFHL hat trick, leading his team to a close 7-6 win over the Outlaws.
Week 4 : Brandon Hall - Anchormen

Brandon walked right through the Devil Dogs with 4x back to back goals including the game winner. I am almost certain I was on the ice for all 4x, which means you were too Clayton.
Week 5: Matthew Dubuc - The Outlaws
Matt has been a constant all season on the Outlaws scoresheets, this week scoring the game winner in a high scoring 7-6 win over the Flyers
Week 6:
Alex Archer - Devil Dogs
Alex leads the Dogs in goals, 2nd in points and netted a clutch buzzer beater Sunday forcing a shootout.
Josh Smith - Flyers
Josh was running on empty after reffing more than a dozen games during the day, then came up and played his ass off the whole game versus the Dogs. He went head first into the boards in the far end, bounced up and was ready to take the face-off immediately, gotta love it.
Week 8: Brian St.Louis - The Pack
Brian brought his A-Game and held off the Devil Dogs for a big win in the standings.

Week 9: Tobin Spring - Bruisers
Tobin set the pace despite being short benched, scored all 5x goals for his team Sunday, and showed real class with a late game empty netter versus the Dogs.
Week 10: Iain Campbell - Flyers
Iain potted a hat trick in last Sundays game versus the Anchormen, then scored the first goal for his team in the shootout carrying his team to a win.

SEASON 6 - Poutines are all pre-paid at the concession stand, just give them your name.

Clayton started the week of with 2G 4A and sits at the top of the points race. For a late round pick to get off to such a good start, we gotta give this kid the poutine.
Week 2: Nick Zimmer - Bruisers
Flashed some hands in the first shoot out of the season securing the Bruisers first win versus The Pack
Week 3: Brian Hill - Baggers

In a week with 6 goal and 4 goal nights, Im going the other direction and giving the Poutine to a grizzly old D-Man. Not usually associated with high point nights, Brian put up a 1G 5A night versus the Bruisers. I just hope I have the right jersey number, not to doubt you Brian.

Week 4: Ryan Sowery - Anchormen
Ryan opened the scoring for his team in a 1 goal game with a beauty tip-in in the first period.
Week 5: Aaron Chambers - Baggers
While the Baggers still lost to the Net Hunters in the seasons highest scoring game yet, we have to honour Chambers 6x goals and 7x points.

Phil scored 4 goals and 1 assist in a win vs Bruisers which put his team into first place this week.
Week 7: Geoff White - Anchormen

Geoff and the very short benched Anchormen came back from behind versus the Net Hunters last Sunday, with Geoff scoring the tying goal in the final seconds, then went on to score the game winner in Shoot Out.
Week 8: Josh Smith - Net Hunters

Josh missed a couple games with work, but came back flying Sunday leading his team with a hat trick.
Week 9: Ryan Brown - Net Hunters
Ryan scored 4x back to back goals keeping his team in a game they would go on to win in shootout. Boom!

Week 10: Shay Webber - Manaics
Shay played a great game keeping his team in a rough one versus the Bruisers resulting in a big win for the last place team.
Week 11: Jason Diggles - Maniacs

Craig played his usual full speed ahead hockey and scored the game winner in a close game versus the Baggers Sunday.
SEASON 5

Week 3: Ken Atwood - Maniacs: Keeping it classy in the 3rd versus the Flyers.

Week 4: Phil Montgomery - Devil Dogs: Led Dogs to first win with a hat trick including the game winner.
Week 5: Tobin Spring - Bruisers: Tobin led his team to their 1st win of the season with 4x goals and 5x points.

Week 6: Chet Rutledge - Keggers: Chet put on a keg worthy performance, making lots of good saves during regulation and a huge stop versus Chambers in the shootout.
Week 7: Matt Heavens - Flyers: Matt played a solid game helping his short benched team to their 2nd win of the season over the Keggers last Sunday.
Week 8: John Kerr - Baggers: Junker scored the late game tying goal versus the Flyers then went on to win it for his team in the shootout Sunday.
Week 9: Ben Vandenhuvel - Devil Dogs: Ben Vandenhuvel for led his team to a big win over the Net Hunters last Sunday.
Week 10: Dave Seymour